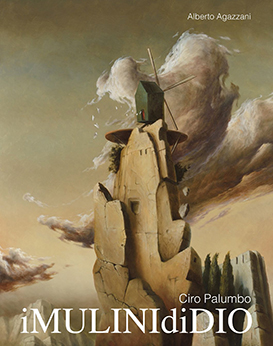 The solo exhibition “The Mills of God” by Ciro Palumbo, curated by Alberto Agazzani and promoted by the Council for Cultural Heritage, opens in the refurbished rooms on the ground floor of the Santo Spirito Monastery (formerly Nola Prison). The exhibition comprises 20 oils on canvas and 8 oils on paper. The works, all of which are being shown for the first time, are inspired by the work of Pieter Brueghel the Elder in the famous painting The Procession to Calvary dated 1564, closely analysed and studied by the director Lech Majewski in the film The Mill and the Cross. Ciro Palumbo reconstructs the journey of the Flemish artist, starting from the metaphysical presence of the Mill and working in an ideal parallelism of atmospheres and reflections. For the 16th century Dutch artist, everythingseemed to end in the sacrifice at Calvary, while for Ciro Palumbo, that end is a new beginning: the victory of good over evil, of light over shade, of hope over the deceit of solitude. Ciro Palumbo transfers to canvas the profanation of time which draws men into its deceit, men who are born and die, inevitably wanderers and prisoners in the spider’s web of human evolution; he paints The Mills of God which, due to the stupidity of human indifference, fall to the ground, surviving only as millstones, reduced to nothing more than ruins in settings steeped in the colours of drama. Palumbo abandons the inclusion of the symbolic element, reducing and twisting the perspectives of the places, and, with the power of colours alone, evokes the painful suggestions of the profanation of shade and solitude. The story unfolds through groups of works which mark the various legs of the journey where, in the end, the flour of faith is transformed into the mystic body of bread thanks to the yeast of sacrifice. The big mill in the centre of the Flemish painting, which symbolises a dominant God but also, on the contrary, the fatigue of living, is transformed by Palumbo into an island of the living, a new and unexpected place of the spirit and of painting, a new destination which imposes a new journey into the invisible. Palumbo’s interest in the Panic mystery ofthe landscape, made emblematic specifically by the large, lone mill, is the unquenchable desire to probe the infinite mystery of painting. Once again, Palumbo immerses himself in his visions, in that metaphysical obsession which takes him on a journey to other shores and other islands, challenging time and space, physics and every possible reality. Here, painting reacquires and confirms its extraordinary record for the portrayal of the invisible, of the transcendental, of a something which, for some people, coincides with God and, for others, with a metaphysical element which has still to be proven.
Solo exhibition in Convento di Santo Spirito, ex Carceri Via Merliano, Nola (NA) From October 18th to November 2nd 2014
Curated by Alberto Agazzani, Critical Text by Stefano Gagliardi
Project management Galleria Gagliardi San Gimignano
Exhibition promoted by:Assessorato ai Beni Culturali Comune di Nola,With the patronage of Diocesi di Nola Partner Fondazione Festa dei Gigli, In collaboration with:Associazione Culturale Meridies, Associazione Culturale Pandora