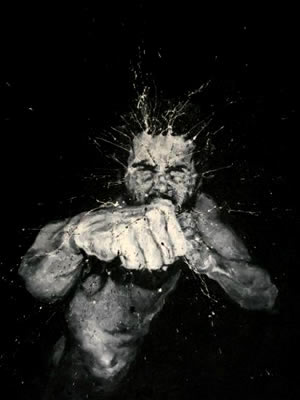 Since the mists of time, man has represented himself: in scenes of hunting rudimentary painted on caves, in battle settings in which were told fierce fights, celebrated as an hero at the head of armies or on mighty steeds.

In times of piece: men bent on luxuriant fields of harvest, on boats with full fish nets, in feasts celebrating life.

We can find him in wall frescos, on canvas, carved in marble, chiselled in bronze, immortalized on glossy pages, on photographic films.

Represented in various labours, in the most disparate posing and attitudes, with other women and men or alone, joyful or sad, meditative or vague, portrayed in dances, battles, bacchanals, adventures, loves and deaths.

In self-portraits in which the author proposes himself in a realistic way or in meditated poses.

All of this and more is Man and Life.

What else can we celebrate about this being? Everything has been said, represented, narrated and described.

An Artist may try to report his energy and the physicality expressed, he can seek to investigate in the depth of the inner self, to create a work to tell the split second of the emotion and how the body makes it undisguised.

Differently from other Artists who have self-portrayed themselves during the times giving a face to whom, for years, has represented the others, Troilo hides deliberately his own one, because it is not so important for his aim.

His research examines and analyses the intimate feelings, leaves his body free to move abandoned to the reiterate music.

Swift photo shots immortalize moments. After individualized, recognized and seized the precise moment of his own emotion from the photographic sequence, Troilo sets apart, and lets re-born himself in the pictorial work through his tactile perception.

Without the Brush tool, which otherwise would filter all his sensations, Paolo Troilo contacts the material and, as in a transfer, he himself becomes the material and the colour. A gesture speed, an impulsive pictorial act so that the immediacy of the emotive involvement does not get lost. He is the object of his own painting and at the same time becomes the pictorial subject, but for true, the emotionalism of which leaves memory on the canvas, are universal frames of mind.

An intense relation with the canvas, as it represent the other side of Troilo, the mirror world in which the transfer materializes and where the moment changes to emotion.

So he succeed to give life to bodies moving into the defined space of the canvas, in a choreography without music: subject and object become first characters in an expressive freedom allowing to reveal full truth acts, which disclose the spectator what he decides or wants to see and in which he is able to recognize himself.

Splashes and stains seem to be an underscore of the figure’s movement, but they could be also meant as the depiction of its emitting energy.

This energy could be also caught in the expressive intensity of the contorted features in the effort to set free the body.

If we released our body, as the Artist suggests, from a coercive behaviour imposed by the world and the society that we made ourselves, even our spirit would be free.

In a society requiring a complete attention, otherwise we would be emarginated, perhaps our body, together with our mind, are the only and unique truths in which we can take refuge.

Only in ourselves we can meet the propelling strength that motivates us to live intensively and entirely our life.