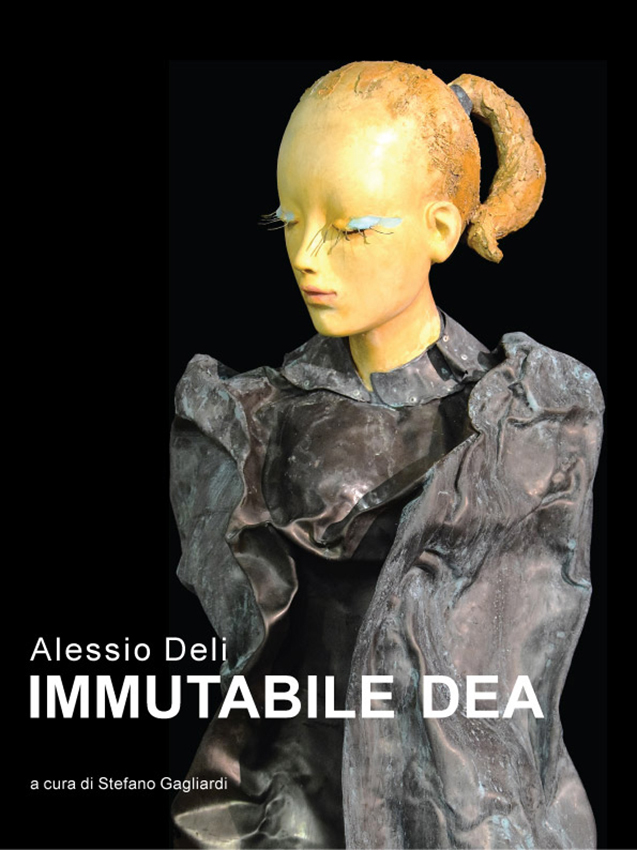 Alessio Deli’s solo show, presented in the large rooms of Galleria Gagliardi, is made up of nine sculptures and an installation. All ten pieces are made of resin and a variety of recycled waste materials, such as iron, sheet metal, lead, wood, polyurethane, resin and marble dust.
The artist, who has undoubtedly made the Arte Povera style his own over the years, proceeds steadily towards a combination of sculpture and painting, so much so that, today, the works of Deli the sculptor couldn’t possibly exist without the intelligence and skills of Deli the painter. Besides the violence of the hammer, the aggression of flame and the intensity of rust; beyond the intensive use of acids and oxides, it is thanks to the mediation of painting steps and colour combinations that the artist succeeds in infusing his sculptures with another life in terms of value and beauty: on one hand, the important value of recovering materials, starting from unprecedented combinations of use and new expressive languages, and on the other, the pursuit of a beauty that goes beyond the exteriority of sensual and banal aesthetics.The sculptor seems to draw inspiration from that unchanging goddess that resides in every woman. The goddess that knows the immutable secrets of life and death, that hides the mysteries of Love behind lowered eyelids. The same goddess that has crossed every time and every place, and has never abandoned the memory of herself and of others, treasuring every experience as a gift. In this sense, Deli’s sculptures are substantially portraits oriented towards an idea of beauty that is real, good and just…. and, consequently, desirable. The event “IMMUTABILE DEA” (Unchanging Goddess) will be documented with a digital catalogue in Italian and English, available for consultation on the gallery website and for download in PDF, along with a video and brochures in the gallery.
Alessio Deli was born in Marino, in the province of Rome, in 1981. After studying at the Marino Art Institute, he graduated with honours from Carrara Academy of Fine Arts, where he specialised in sculpture. Subsequently, he qualified to teach plastic arts disciplines at the Academy of Fine Arts in Rome. His area of research and artistic production, begun since his training years, has been developed and enriched over the past decade, focusing on figurative themes, both in his drawings and sculptures. As regards sculpture in particular, the imprint that he applies to his works is revealed in the assembly and modelling of recycled materials. While his style is deeply rooted in classical tradition, his desire to restore life to abandoned materials and to recycle things gives his work a pertinent postmodern feel. Arte Rai recently made a documentary on his work, entitled “La Scultura Ecologica” (Ecological Sculpture). His works are on display in public spaces like the Basilica of S. Maria in Aracoeli, Rome, MacS in Catania, the Raccolta Civica d’Arte Contemporanea at Palazzo Simoni Fè in Bienno, and the Museo d’Arte Contemporanea Roberto Bilotti in Cosenza.
Since 2015 he has been permanently exhibiting at the Galleria Gagliardi in San Gimignano.
Information
Galleria Gagliardi - Arte Contemporanea - San Gimignano
Via San Giovanni 57, 53037 San Gimignano (SI)
Tel. +39 0577 942196
Mobile +39 393 1643615
E-mail: info@galleriagagliardi.com
Web: www.galleriagagliardi.com