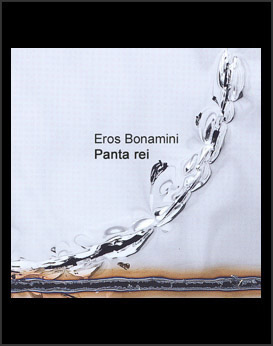 The balance of the opposites

In arts, one of the most effective methods to show something - a material, an object, a concept – is that to approach antithetical elements, apparently inaccessible polarities, but supported by a secret link, which, once established, exalts the characteristics of every singular factors. Some examples: the black and the white or the red triangle breaking the white circle in the El Lissitzky’s revolutionary manifesto… There are numerous cases of opposites, and nearly we could say that we can find them in each art work, hidden or clear…
Being an artist, Eros Bonamini not escapes - does not want to – from this construction and rather he makes of this his main research field. What else are his Chronotopographies ( the title given to all of his works, a bit resembling to a habit of historical vanguard, with that technical and philosophical definition concerning time, space and sign ) if not the demonstration of secret relationships, brought to light with the opposition, the conflict, the battle of the opposites?
A steel mirroring slab - the basis of all of his works, is cut, signed by the blowtorch or laser, with signs which are both simple and antique: the cross, the spiral, the line, the circle…; The purity of the material – what is purer and colder than a rejecting matter reflecting images? – is damaged, destroyed, burnt by a violent action, in which the result is a sort of wound corroded on the surface; the presence of these so opposite elements gives them strength instead of annul, exalts them rather than depress…”
“…For this reason his research moves always on that essential level, where sometimes a color, a materic jolt, a three-dimensional hazard, adds, but where the final composition gets never more complicated, obscurer. Everything is clear, on the surface, where the all coagulates: paradoxically, even if living in a world of art where the context becomes more and more important, the work of Bonamini is among the ones less needing it, pretending to leave the look never wondering, staying always on the surface, in a “here and now”. In this sense, Bonamini recovers coherently that “tradition of the New” that released art - and moreover paiting: and that of Bonamini is to be defined “painting” – from each over-structure and that went down on the stairs of an hypothetical artistic “periodic table” to reach those indivisible elements forming the grammar and syntax of the pictorial language and the constitutive core of modernity.
So, despite of a vague anachronistic sense in that definition of “Chronotopografies”, is undoubted that Bonamini targeted with that meaning, the problem around which his work moves, which is not only that of the matter ( the “topos”), but also the gesture (“grafia”) and so the time (“crono”). The materic surface preserves the sign, and so the time’s memory, of a “before” the intervention, with the presence of the working subjects as the surface and the artist, of a “during” which is literally tearing, and of “after” which is the result, the outcome…”