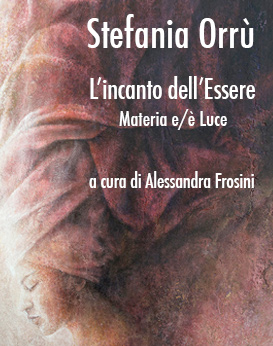 “Stefania Orrù is an artist who interprets the contemporary world through her authentic, existential and poetic world, without losing her true natu- re: with her, concept becomes material and the works withhold and send out the light of the idea. In her works there is a deep echo of experienced aesthetics that even undo and therefore suspend the idea of time, overlapping past and present.”

“The limpid classicism of the subjects, figures, rarefied faces and profiles, the attention to the body that underlies respect and consideration for the individual that stands out in an immaterial space made palpable by transparencies and textural depths : the faces that, at first glance, recalled the fixity of Byzantine icons, dissolve to show the ephemeral depth of the sensations, emotions, feelings and consciences manifested through painting. The measured and precise balance of the compositions also relies on the shade that blends with and opposes a light created from the diaphanous, which rises from the depth of things and expresses their infinite power. Phenomenal reality is always partly obscure and undecipherable, and thus destined to inevitably blend shade and light, interior light, the internal and invisible core of things, eidos – the essence through which the Being manifests itself.”

“..Effects made possible by an elaborate experimentation matured through the choice of a mixed technique that unites fresco, tempera grassa and hot wax to create otherwise impossible overlays and veilings.”
“...Light and darkness, intended as places within the mind, as worlds crossed and crossable by the very Being itself, are captured through plays of chiaroscuro taken to the extreme, where the profiles of the figures, the drapes, the hands, are both real and symbolic forms, and appear like keys to reading that testify to the Being, steeped in contradictions, and in obscure and luminous territories.”
“...We face ourselves, the same as always and ever-changing, in front of a mirror which is also a bridge, a crossing point that serves as connection between the manifest and the hidden.”
“...before art, the elsewhere can always be found here.”

Taken from the critical text by Alessandra Frosini