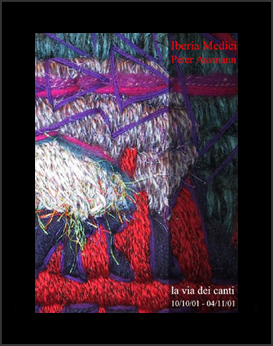 PHYSICALITY AND MONUMENT OF ABSENCE

The hermeneutic horizon of modern age is characterized by the consciousness of the impossibility of a bridge to the traditional. Maybe that is the reason why the search for the right question, the one which recreates and which heals that interior and collective rift that makes the “loss” evident (and the one which is always found in myths right up to the modern Parsifal) goes on continuously - as polarized reference and nostalgia for things fundamental. It also characterizes the quests of those artists who inhabit the borderlands, the frontiers. I remember a beautiful passage of Appolinare  who asks for pity for those who dare to venture out and dwell in unplowed lands, and thereby jeopardize their own integrity. The hope that drives them onwards is that of acquiring a ‘novum’, something new that will enable them to speak - or rather speak rationally - in an intelligible manner, so as to bind it with and encompass in their words as a common structure that will make endurable that pain and suffering which also constitute the place where the  re-conquest of the self occurs, after an awareness of one’s state, namely that one is a voyager in the realm of consciousness, has been attained.

And this is the condition of modern times: the age in which technology - and the transformation of the world brought about by it - precisely because it has made life easier, brings to consciousness the problematical nature of its identity and the uncertainty about what there is that it can still cling to. This finds expression in a nostalgia for the origins and in anxiety concerning the present: uneasiness and dissatisfaction with the established truths and the existent system therefore have become the predominant features of subjectivity.

The work of Peter Assmann elaborates that disorientation, clearly the heritage of Middle European culture. In this exhibition he evokes not so much the feeling of a lack of  meaning but that of pure ‘absence’.  This position reminds of other Austrians such as Thomas Bernhard and Peter Handke - which are the best known - who have given us admirable pages to dwell upon and research. They exemplify the vocation to criticism found in the best products of Austrian culture. We also remember the masterful narrative of Claudio Magris in “Danubio” when he starts to tell about Regensburg and its stone bridge: “The imperial pathos is the pathos of absence, of the lack of equilibrium between the grandeur of the idea and the poverty of  reality”. “The Absence” is also the title of a novel of Handke written in 1987, in which geographical ramblings retrace the vagaries of the consciousness and its reflections.

The subjectivity of the story renews the mythic experience of the journey as an occasion for possibilities and for initiation. This journey and the encounter with art undertaken together with Iberia Medici shows this willingness to ‘alteration’. This becomes apparent within a context in which the migrations and cultural contamination give rise to meanings different from those found in the culture of the 19th century. The interest of that latter culture in the Mediterranean ‘vita piena’, the ‘full life’ as single force of the ‘tutto in atto’, life in its entirety, and content in itself, once a “myth”, it has now been transformed into mere ideology in our times but it still tempts the linguistic expression. Even when it stumbles, and as a matter of fact especially in our times, it still dreams of a union of all things which it achieves in permanence on the intercultural border. Subjectivity is found at  borders, caught in a suspended fall, investigating hypotheses about touching the ground and at the same time delighted in the exhaustion resulting from falling. Words are found insufficient: hope has to be aroused that someone else, on different occasions and in other places finds the resources and honesty  to accomplish the task, thus enabling meaningfulness to be transmitted. And at this point Medici’s Mitwerke become comprehensible.

Due to his look-out position on the border, like a sentry, and at the same time confronted with the limitations of language, the artist is like a meteorologist able to  see and examine the spirit of times. Ours are times of incompleteness, of awaiting.

The work realized by Iberia Medici, according to the instructions of  Peter Assmann, should not distract or confuse: the use of diverse techniques and materials by means of which Iberia Medici modulates her own “assets” consisting of expertise, resources and sensibilities, is comprehensible in the light of the spirit of time. Behind the spectacle of contamination, of techniques, of cultures and “other” artistic traditions, the same “emptiness” is concealed which causes nostalgia to surge forth from  the depths of our very being. This exhibition therefore seems to center on the consciousness that continues to exist and gazes beyond  the unfathomable emptiness. Even when - at times - these eyes are captivated, immersed in the luxuriant force of the elements where life seems to join with art to seduce the mind and the senses.

In the Sicilian artistic panorama Iberia Medici and her work have been like a karst subterranean river which has touched diverse territories, emerging if not to test, at least to feel the spirit of  time; times as the result of contamination, whose identity is understood and interpreted in the light of their transformation. Her work is the manifestation of a pluralistic spirit. Many indications reveal a subjectivity that on the one hand is in search of its own roots but on the other takes note of the formation of  a pluralistic identity which has already taken place. This subjectivity can be found in  Iberia Medici, her expressive techniques as well as in the object of inquiry:  in the rediscovery of a place and time in harmony that are able to absorb a reality claimed to be unsystematic, nomadic, contaminated. We seem to be confronted with the statement of an anthropological impossibility which on the one hand centers on the theme of “disorientation”, on the other on the essence of those “other” cultures that have in the last three decades contributed to the formation of the “mosaic spirit” in the Western culture; a broken mirror which transforms identity in an intercultural dialog.

Openness of mind is therefore only possible if we optimistically abandon our own identity in its totality - a kind of identity which, in any case, is hardly desirable, considering the disastrous results it lead to at the beginning of the 20th century - in order to open ourselves to the wealth of contributions which the flow of experience and the growth of competence give rise to in the course of one’s perambulations  which lack solid foundations. A reminder that an opportunity is not always really an opportunity might here seem to smack of affectation. The challenge is to be curious and attentive to new ways of orientation in a cultural world that is no longer monolithically defined but rather is ‘pieced together’; a world that embraces, one that is populated with contributions creatively designed to enable a new level of dialog and research about new orders of sensibility, of experience, of culture and therefore of memory and  history. This is a paradigm established by the most recent work of French sociology lead by E. Morin: the journey that is neither simple nor painless, that makes order, disorder and organization fluctuate. But I remember also M. Serres  when he, in writing “The Cloak of the Harlequin” speaks of the “included third”, in contrast to the “excluded third” of occidental logic. Or think once again of Morin when he traces the new image of  the  European existence, even outside of Europe, and then finally proposes a reform of the way of thinking and of acting in a communicative fashion. So get started and enjoy the challenge!