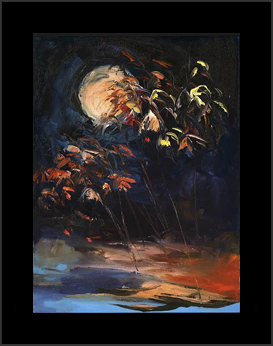 Sandro Negri - 1940 - Italy
The whole art by Sandro Negri expresses a perfect communion between man and nature; the harmonic and symbiotically union nearly suspendedbeyond time, originates from themes suchas the rasping and lavender's picking, strongly anchored to a centurial past and marked by regular gestures. Farmers are silhouettes moulded by labour's heaviness: they perform and only slightly modify the harsh and inexorable rhythm imposed by earth and yield to it through a daily struggle, carried on with sincere and admired respect.
This artist gives his paintings a temporal dimension, thanks to an essential pictorial idea, which,although in a fresh figuration of a traditional kind, does not indulge over a descriptive detail with gratification, but returns an interiorised vision of endless plat lands.
Negri's gesture is quick, spontaneous and aggressive; the thick oil, directly poured on the canvas and the use of the spatula at the start create mellow colours with a swift and unravelled stroke of the brush, with a modern European root. Fluid and musical intervention of the painter evolves into a joyful chromatic outburst. The burning wheat, golden mimosa and scented lavender.
Some paintings, although with a firm colour tone, narrate in a low voice, nearly in silence: a fire-chain is hanging, the wood pell-mell is staked, old walls of farmers houses with old chairs in front the door, the broken branches of the “calicanthus” are whispering in a murmur of silent harmonies, simple events,which assume a loving and pregnant meaning and exhale a sense of familiar warmth. At last other works are more restless and permeated by a feeling of incipient caducity.