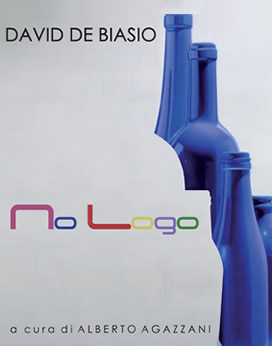 Things of the mind

David De Biasio is a painter-painter. This statement, coming right at the opening of the catalogue of his first Italian show, might sound rhetorical, but it is not.

Painting, Leonardo teaches us, is, above all, a “thing" of the mind. Picasso defined it as “something suspended between canvas and paint.”

Painting, therefore, cannot be merely reduced to and understood as a language of expression; it is also the result, the expression, the end of a communication/abstraction that traditionally takes shape through canvas, brushes, and colours.

Yet, in our modernity, we have accepted that works of art created through other techniques and languages can also be forms of Painting. It would be wrong-headed not to recognise that Bill Viola’s videos or some of Damien Hirst’s or Jeff Koons’ installations, to cite but three extreme examples, contain a strong “painting” component, although pursued by unconventional means. A different point, and a central one here, can be made about photography: born as imitation and simplification of Painting (Daguerre was a painter and Niépce an engraver), photography has always been subordinate to Painting, seeking to break free of it only in the most extreme modernity. But the very tight bond of substantial dependence between photography and painting is only partially real; it is easy to argue against it because optical instruments, the very forerunners of modern photography, were already used, and even deemed to be essential to painting, as early as the first half of the 15th century. Extraordinary examples of this are found from Jan van Eyck, Leonardo, and Caravaggio to Ingres and all the way to our days, to the American Hyperrealists. In fact, the relationship between photography and painting was reversed by their rise in the late 1960s. In the American arts scene of those years, Art stops representing itself and sheds all aesthetic, even visual reference, to evolve into a kind of anti-art. The new American Art must pose questions and question itself, bring about a reflection, whatever the cost; it shall not exhibit itself, or awe, let alone narrate or illustrate. The event replaces the image as the subject of the work of art, thus undermining the centuries-old primacy of the icon and the central place of the object/subject. Photorealism’s birth fits in this landscape dominated by abstractionism in its many forms (from Pollock’s and De Kooning’s violent expressionism to Rothko's seraphic spirituality); it is another (and higher) outgrowth of Pop Art, sharing with it a return to the object/subject, the hyper-visual foundation, and, especially, “the aesthetics rooted in the visual artefacts of street culture.” (1). Without dwelling too much on the modes of expression of the original photorealist painters, two aspects of the American photorealist tradition seem pertinent to this introduction: the ongoing reference to the “street culture” of the so-called “American myth” and the use of photography, also as a base to make one’s own paintings. The first characteristic is easily identified in the choice of subjects: glimpses of city views, daily objects, symbols of American pop culture (cars, motorcycles, neon signs, trademarks, logos, advertising images, etc.) The second, and more treacherous one in the aspect that fuses painting’s and photography’s techniques, is found in many of that season’s historical main players who made (and make) broad use of photographic bases printed on canvas, identifying in this a deeply revolutionary conceptual impulse (from Paul Staiger, Stephen Posen, Franz Gertsch, and Chuck Close to Peter Maier.)

We all know that, in painting, the end always justifies the means and that its tools of expression have evolved for centuries along with the new scientific and technological advances. And for just as long throngs of purist have formed and risen, ready to question the legitimacy of the newly adopted tools or techniques. In the early 15th century, Jan van Eyck perfected oil painting and introduced its use in preference to the traditional tempera grassa; some, at the time, called it a scandal and even talked of an “unclean technique.” The same scandal was denounced when, during the same period, the camera ottica, ancestor of photography and cinema, was introduced; and the scandal is renewed today by the use of projectors, aerographs, or photographic bases.

The utilisation of technology in art and painting is therefore not new, nor is it really unacceptable. However, the case of photographic bases demands a deeper discussion. The current very simple and accessible use of latest generation plotters and printers, supported by digital cameras and highly sophisticated image processing software, fostered the rapid (and mysterious) rise of a crowd (as large as it is suspect) of “hyperrealist painters,” for lack of a better term, having surprising technical skills. The suspicion and surprise are not generated by the extraordinary and truly seductive beauty of the paintings created, but rather by the improbable number of works produced, and by the very high graphic definition, in some cases impossible to match with painting’s traditional tools. The suspicion that these images are processed in the computer, printed photographically on canvas and re-painted (or touched up) is something more than a guess and, in itself, if openly admitted as the American masters do, would not be a minus, or even less the object of blame. What should really cause a scandal, especially in the face of ostentatious purist pride and loud ethical hypocrisies, is the behaviour of those who translate suspicion into reality, hiding the true nature of their works of art: the use of pre-printed photographic bases, somehow transforming an absolutely legitimate practice into a colossal and grotesque farce.

When, at the start of this presentation, I defined David De Biasio a painter-painter, I intended to sweep away, once and for all, any doubts about his expression research and his amazing technical mastery. As it often happens when someone possesses true talent, these two qualities, interweaving and melting into each other, create true originality, that inventiveness, that unprecedented visual conquest from which it is difficult to come back.

De Biasio's visual education took place in Italy, in close contact with Beauty and with our great artistic and architectural tradition. And this is evident, also and above all, in his aesthetic and expressive choices, in the adoption, at least up to now, of the “Still Life” as his preferred genre, as well as in the proud, but never ostentatious or extremist, sense of belonging to that noble progeny of painters deeply rooted in the artisanal dimension of their “doing art”, in the inalienable and voluptuous “sensuality of contact with the canvas” (De Biasio’s words) through brushes, colours, and oil.

In this sense, De Biasio is a painter firmly anchored in the Italian tradition, also, but not only, because of how he looks at and represents his reality. Attention to tradition, then, but also to its renewal: that “tradition of the new,” indeed, which has characterised our art from Giotto to our days. In fact, while the tools of his work remain pure and traditional (white canvas, frames, brushes, oil paints, and varnishes), the study and elaboration of the image/subject are enriched by new stimuli and tools: from digital photography and its computer processing to projection on the canvas; exactly, but in a much evolved form, what Jan van Eyck, Leonardo, and Caravaggio did, oh so scandalously, with the camera ottica.

“Hyperrealism” is often mentioned when speaking of David De Biasio’s paintings (I have done it myself); this lucidly and consciously simplifies the terms of the question and focuses on the evident surface of the paintings’ manifest expressivity. But can a painter be defined hyperrealist or photorealist simply on the basis of the very high definition of his realism? In a nutshell: can the form overwhelm the concept, the ideology that underlies a style?

As we have seen,(American) Photorealism and the derived (European) Hyperrealism were grounded and still rest on well defined concepts and expressive finalities directly derived from Pop Art, also, but not only, through a totally unprecedented use of photography. On the other hand, all this cannot be in any way compared to the expressive research, and subsequent creations, of so many Italian “extreme” realists. In Italy, as in a good portion of the Old Continent, the trend towards absolute realism has origins that are well defined and deeply rooted in time. We come back, again, to the mid-15th century and again to that revolutionary Jan van Eyck, inventor of methods and techniques. In Italy, that exasperated search for mimetic truth finds outstanding examples and continuity through Leonardo’s, Caravaggio’s, and Cagnacci’s lessons, to mention but the early ones, who can be defined as anything, even “pop” forerunners, perhaps, but not ideologically hyperrealists!

De Biasio himself took his first steps in the world of painting pursuing a classic, far from extreme, realism. His visual revolution took place in the United States, where he lived from 2003 to 2008, enriching his visual perception capacity thanks to his contact with the variegated and lively New York arts scene and, above all, through his direct interaction with the original Photorealism. This experience led the Italian painter not so much to an ideological embrace of hyperrealistic concepts, but rather to technical learning, to strictly in-depth pictorial explorations aimed at achieving an extreme realism steeped in the Italian sense of Beauty.

Moreover, his Still Lives reflect a just as strong drive towards light and Nature’s wonders (often represented also in its “mineral” dimension, with marbles, shells, and rocks, almost as in a Wunderkammer), without the American special effects, mirrored and mirroring deformations, or grandiosities; rather, they dwell on the strength and warmth of colour, on the harmony of compositions, on an almost mathematical, although never sidereal, absolute control of all balances.

The subjects then are the least “Pop”, and therefore the least hyperrealist in a narrow sense, that one can imagine; on the contrary, they fully belong to the “Still Life” genre that, since Caravaggio, has been assumed and rose as autonomous and typically Italian.

In this case, therefore, one should speak of “extreme realism”, perhaps of “cynical realism”, when the coldness of the representation excludes all emotional involvement other than the awe before a graphic marvel (but this is not De Biasio’s case.) Certainly, it is not conceptually correct, here or elsewhere, to refer to concepts such as “Hyperrealism”, or even less “Photorealism.”

Even in De Biasio’s latest pictorial research, the “No logo” cycle presented here, the potential “Pop” tendency given by the use of immediately recognisable bottles is transformed into a sort of extreme reversed neo-Morandi-style, that here is implacable, inexorable, and so totally arrogant in its perfection and in the stupefying play of light, shadows, and reflections, that it defies any attempt at a reading in any way hyperrealist. The other intent is clearly pursued through the systematic and complete elimination of all logos and trademarks, hence “No logo,” the latter ones being the essential, primigenial, and inescapable elements of Pop nature.

A return to the origins then? De Biasio’s paintings confirm Martini’s postulate that the only possible modernity is that of sensitivity. De Biasio is the living proof that five centuries of history can converge and renew themselves in the simple and limited space of a painted canvas. But the glance, the eye, and the mind that underlie its creation are the beneficiaries of a heritage and a dignity that no technology, no invention, no shortcut can erase. Just as nothing can replace man in the creation of that “thing wholly of the mind” called Painting.