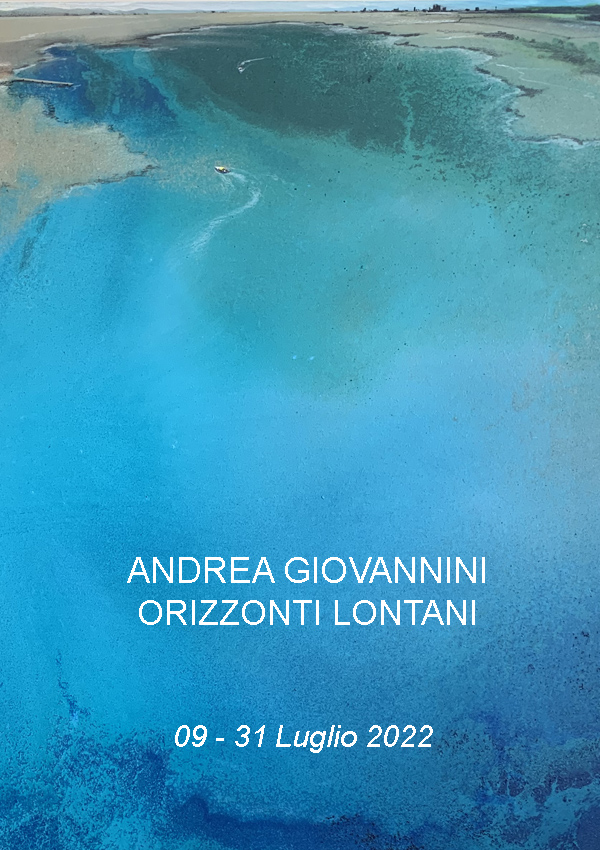 Just looking at one of Andrea Giovannini’s works can appease wanderlust or even be like a vicarious voyage, offering so much more than a pleasant sight. In this phase, his art seems to express the desire-metaphorically speaking-to possess the whole world at once. Giovannini is like an explorer from ages ago, when discoveries resulted from a creative effort, when new worlds weren’t just seen as “found”, but even invented in the very instant they were given a name, in the moment when they were described and measured. That of Giovannini becomes a fantastical map of sorts, charting perfectly credible worlds. The act of conquest in our imagination repeats itself on the painted panel. You sense a liberty that isn’t just freeing, but also playful, light, and powerful, precisely while recognizing the strength and beauty of creation. The artist has been creating what he calls Fondali, Visioni dall’alto (Backdrops, Visions from a high) and Voli silenziosi (Silent flights) since 2018, but the very next technical experimentation of this idiom dates back to the early 1990s in Urbino at Pietro Demitri’s studio.The use of melted enamel on panel generates quite a fascinating effect, perfect for describing seabeds, expanses of wild land, or prairies.Andrea steps in when accumulations or nuances give him a glimpse of coastlines, horizons, trails, roads, or paths that he develops pictorially with a mixed technique, creating landscapes (cities in the distance, villages overshadowed by cathedrals, regional airports, beaches with umbrellas and sunbathers) or adding isolated elements (boats, lighthouses, airplanes, hot air balloons) with his usual lenticular precision.Sometimes he adds very ethereal white streaks, clouds that flutter over the landscapes, billowing the notion of infinity, of a divine eye that dominates from on high. He has excogitated an intriguing visual approach, combining a bird’s-eye view, parallel to the plane of the painting, with a frontal, perpendicular view.                          The boundary, the horizon, and the edge converse with the vastness of the sea or the earth. It’s as if he were combing the charm of “sweet nothing” and Man’s inherent ambition to leave a trace of himself, to secure his place in history. There are never islands but rather known, reassuring civilized landings.                                                                                                                                                                                   The lighthouses seem ready to withstand the tempests they sometimes appear immersed in, the boats to express the tininess of all things human, rather than the notion of bewilderment. For the mountain landscapes, a less frequent subject matter, Giovannini uses other enamels yielding concretions, relief effects, as if they were spurs, glaciers, gullies, against the backdrop of mountain silhouettes and jagged clouds. Also gorgeous are his Notturni (Nightscapes), nostalgic and tenebrous. Dark clouds, spectral moons, and cypresses…We can’t help but instantly recall Friedrich and Bocklin, but with a more dynamic and dramatic slant. Tumultuous, whirling effects that speak to his great passion for the late works of Turner, so modern and informal. I imagine Andrea as an artist that looks long and hard, who through real travel, texts, and images makes way for that which is not already set, who opens a close dialogue with the environment, discovers the root of things. Over the years he has created a metaphoric suitcase which he draws from to create his works. After all, the Indo-European root of the word “art” means “to compose” or “to put together”. As if Andrea Giovannini breathed life into a poetic atlas made up of infinite panels in keeping with the original name of these crafts, Theatrum orbis terrarum, “Theater of the world”. I like to compare him to the greatest engineer of imagination of all time, Jules Verne, who in his works condenses the original and the technological, vicinity and distance, creating daydreams for everyday use.
by Marcella Luzzara