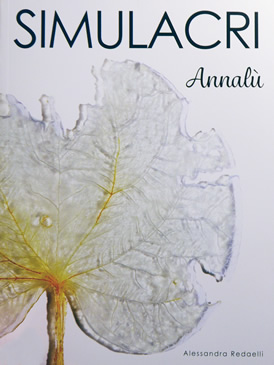 From the critical texts of Alessandra Redaelli "UNBEARABLE LIGHTNESS";Nature, as always, is her research environment.A recognisable yet “other” nature, exciting in its light consistency, characterised by liquid allusions, which bring the secret paths of the lymph, the light web of the veins and the underground beat of a warm, throbbing heart to the surface.The exhibition features big flowers, like the Peony with its light marine nuances, majestically goddess-like with its fifty fibreglass petals which seem to draw us into a warm, terrifying embrace, or like the sensual Orchid, with its gigantic petals, the edges of which are cloaked in hot, bloody colours.The waving trees, with their canopies made up of butterflies ready to take flight.Then there are the Mandala, and a big leaf - the leaf that lends its name to the title of the exhibition - in tribute to an exceptionally delicate work by two artists, capable - like few others - of giving voice to nature: Anne and Patrick Poirier.Because that is exactly what Annalù gives us; the voice of nature, its hidden breath, its fragile yet immortal soul.Not a nature narrated through images, but through allusions and emotions.Giving life, work by work, to a world which, revealing what lies behind reality becomes even more real, even more absolute.A world of “simulacra”, filled with tender, powerful poetry.In the rooms of the Galleria Gagliardi, Annalù’s subtle game is renewed once more, always balanced between the lightness of transparency and its strength, sculpted into fibreglass, between delicateness and vital energy, between the whisper of the matter and the booming voice of the shape, between nature and artifice, between the most fleeting moment you can imagine - that of a droplet as it falls - and its splendid eternity.