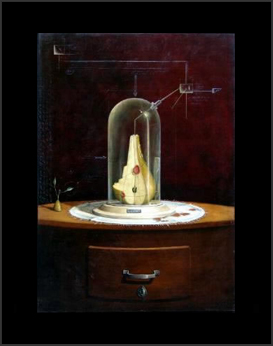 In brush point, precise and detailed, with visual interpretations and flemish memory codes, Virgilio, realizes works in which recreates universes rich both of history and actuality.

Behind the fifteenth-century appearance, (Virgilio is a pseudonym) a cultured and refined Artist hides, seizing contemporary aspects, with crops of disquieting reflection: a balanced alchemy made of codes and definitions. Minutely drawn, his rabbits, carrots, lamps, apples, act as symbolic pretext to further meanings to be decoded. Sectioned fruits, pierced by needles and nails, with coded messages hanging, parchment’s esoteric fragments, mysterious drawers, keyless padlocks, laced tablecloths. Verbal messages joined by resembled improbable and hybrid animal, beings reborn by means of mechanical grafts, cryptic suggestions as to create with the observer, the mystery of sense old play in the imaginary world of a scientist testing the impossible.

Colors are meticulously applied, a surgical paint, cold and able to reveal universal concepts. The last canvas realized for Galleria Gagliardi, hosting for the first time a solo exhibition of the Artist, are connected to the “Place of the Happening” theme. The imaginary objects, legumes, the bionic fruits and the ambiguous animals, live a life in a life, dipped in a diverted and fantastic world, protected by a glass bell. Separated by that transparent cap, they offer themselves to the investigating eye of the spectator.

A place in which, as an opposite canon, time is a different time and the event shows as in a parallel reality.

The planes explored by the Artist are cryptic and alchemic, because they contain lives of a fantastic universe. The mutual relations between false and true, mystic and profane, are entwined and fused, connecting the visual and the verbal set, granting to the observer a variety of meaning interpretations. A journey in the medieval allegory seen with the eyes of a new artistic generation man.

“[…] Irrational is his truth and is clear the purpose to admit as substantial, opposite thesis to which commonly is distributed under the formality of the “logical rigour”. Misrepresentation and quotations of reality with imaginary hazards which the reading of the works sometimes leads to fairytale trends. Other times they are connected to “DADA” versions or, in tune with the obscure side which belongs to the development of the being[…]”

From “The mechanics of Dreams”, text by Franco Basile, 2006, Forni Editore.